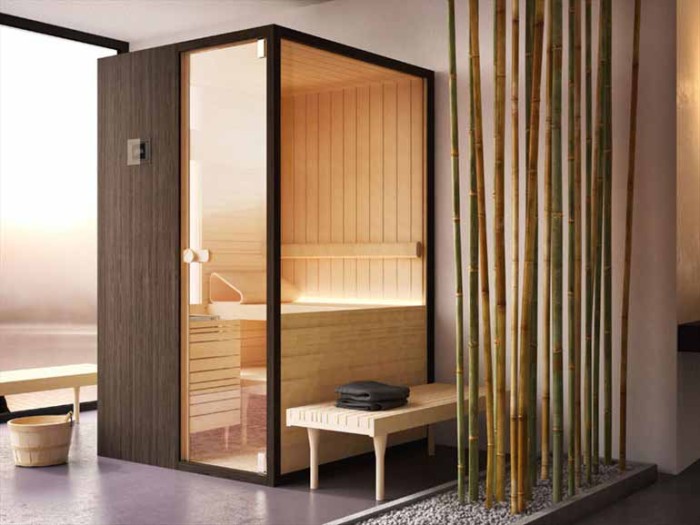 Who was actually the first one to have the idea, that sauna is good for your body? And which rules you should follow when using it, not have any harm?

Saunas and steam baths are used to flush toxins out of the body already for millennia. Modern medicine, especially in the second half of the 20th century, studied heat and perspiration treatment intensively. They confirmed that the feeling of cleansing is not just apparent, superficial, but completely objective. The heat allows the passage of toxins from the body’s cells into the lymph from which sweat is released, and toxic heavy metals (e.g. mercury), pesticides and other pollutants are excreted from the body. During this excretion of toxins, liver and kidneys are not vital, so even these internal organs are relieved here, and the toxins can leave the body even by their malfunction. This may help to some chronically ill people.

A sweat lodge or tent of an American Indian shaman had the same purpose and principle as a Siberian banya, Greek laconium, Roman terma or today´s Turkish bath. Whether it is built by a primitive technique or by modern technology, there are always hot stones to pour water over. Steam bath is older than sauna, which apparently appeared in today’s Finland at the beginning of our era.

Steam baths´ walls are covered with ceramic or plastic panels and hot steam is led into the bath. The temperatures of about 50 ° C are at the limit of tolerability and they are considerably lower compared to a dry sauna, however the moisture is 100%, which increases the heat capacity of the air – water conducts heat more than twenty times faster than air.

The air temperature is higher than the body temperature that is why the vapour condenses on the skin. High humidity prevents sweating and thereby cooling the body; the purifying effect does good both to body and soul.

In the sauna, the effects are caused primarily by heating with dry air and by the temperatures of around 100 ° C. The mode can be sometimes enriched by sudden evaporation of water, which humidifies air in the short term and acts as a thermal shock on the skin. The thermal effect is complemented with massaging the skin by various means. The dry system or the alternate system, which are different in sauna and steam room, are both provided by ventilation and by the kind installation of timber in the interior.

The conditions in sauna trigger the “alarm reaction” in the body, which is the first stage of the response to stress (in this case, it is heat stress). The adrenals start to wash dopamine, adrenaline and noradrenaline out. These substances increase the heart beat and blood sugar levels and support the decomposition of fat. They also release the tension of airways, which means a relief to asthma sufferers.

The secretion of the hormone ACTH and cortisol also increases, and they boost the heart performance, mobilize energy reserves of the body, reduce pain and counteract inflammation and allergies. The growth hormone is activated and insulin levels increased, too. The level of sex hormones raises both in men and women, particularly if it is reduced by a common everyday stress (such as mental overload, anger, sadness or lack of sleep). The amount of beta-endorphins, which is the brain´s “bliss hormone”, is slightly increased.

All of these beneficial effects are manifested if you observe a reasonable length of stay in the sauna, i.e. about 15 minutes of heat and a adequate time of cooling. Longer time of intense effect of heat stress leads to high levels of cortisol in blood, which can cause a drop in blood pressure, a thermal shock and a heart failure.

Stretching of collagen – a series stretching at high temperatures may result in an extension of collagen tissues by 10-18%; if you undergo the cure quietly, you can even hear “groaning” of your joints, tendons, ligaments enveloping the muscles, connecting muscles as well as bones themselves; the joint stiffness caused by rheumatism decreases; the heat helps to treat osteoarthritis, sprains, muscle spasms and nerve pain.

Muscle tension is released by heat.

Pain relief is due partly to the release of muscle tension and partly due to the pain relieving substances produced by the body itself.

The support the bloodstream – a modest increase in cardiac output and heart rate; the possibility of passive cardiovascular training and improving the physical condition for those who cannot do sports actively.

Increased blood flow to peripheral tissues – washing waste substances away by sweating and by internal paths, thus reducing the risk of swellings and inflammation and accelerating healing; at the same time, the immune system is strengthened; deep cleansing improves the appearance of skin, heals acne, eczema, minor wounds and minimizes scars.

Cellulite reduction is due to depth heating, increased metabolic activity in the subcutaneous layers and the subsequent sweating. 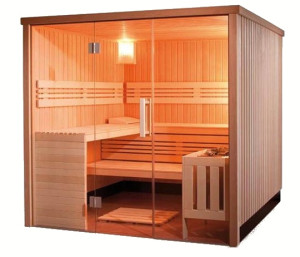 Nordic spruce – good quality, with knots, it is used on walls and ceiling of saunas; the most frequently used

Poplar – the most frequently used, knot-free and not pungent material for interiors of saunas

For standardized sauna and steam rooms (modular) you need:

In this case, it is wise to choose a contractor first and then discuss everything you need, from the layout to electrical wiring, with them.