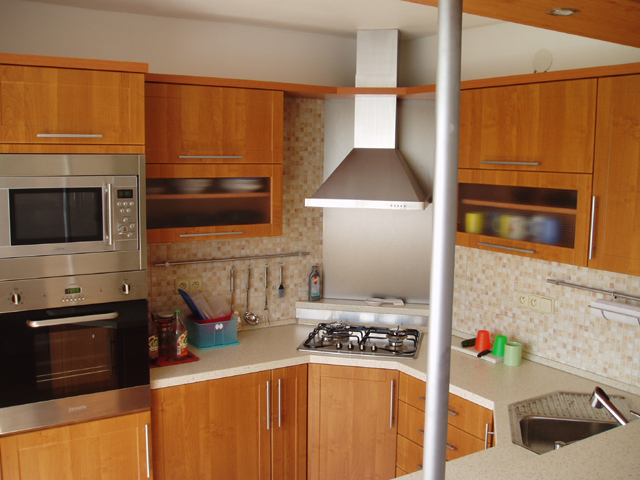 A cooker hood, even though it may not seem so, is a very important household appliance. Someone choose it as a distinctive feature of their kitchen, while others hide the whole apparatus in the upper cabinet instead.

Cooker/fume hoods are used in the kitchens to exhaust fumes and odours caused by cooking. The types include the suspended hood, built-in hood, fireplace hood, chimney hood to the wall or chimney hood into the interior (i.e. islet hood). In this case, the term “chimney” does not mean that the hood must be connected to a chimney, but rather that looks like a chimney. The suspended (overhead) hood is mounted directly below the upper cabinet, the built-in (recessed) hood is built in the cabinet and the chimney hood is inserted between the upper cabinets.

Cooker hoods are manufactured in various colours, black and white are the most often, as well as of various materials, such as aluminium and stainless steel. At present, the hoods made of combination of stainless steel and glass are undoubtedly prevailing. It is also possible to have the whole hood, or its part, sprayed with paint from the RAL colour range. The width of the hood should correspond to the width of the cook top and it should not be narrower, but it is possible and appropriate that the hood is wider than the cook top. Most frequently, a hood 60 or 90 cm wide is used.

The most important parameter of a cooker hood is the suction power. This should correspond to ten times the volume of the room, but if you get a fume hood with a more significant reserve, it will sufficiently extract even at lower power levels and it will be quieter. The exhaust air should be conducted out of the room and of the building, so the hood can be connected to a chimney (be careful not to connect it to the chimney from a boiler or a fireplace!), or the exhaust can be diverted through the wall out. There is a wide range of special accessories on the market, that allow conducting fumes almost invisibly out to a flue outlet located a few meters away.

If there is not the option to divert the vapour out, it is also possible to put an activated carbon filter into the fume hood using recirculation. The filter must be replaced every 6 months. The re-circulating hood has a slightly lower output and increased noise. Each cooker hood is equipped with a grease filter, which is used to capture grease from the fumes. A metal filter that can be cleaned in a dishwasher is a better choice than a fabric filter that cannot be washed and must be replaced regularly. The built-in light is a matter of course.

When choosing a fume hood, it is good to get some advice from an expert. However, you have to pick up the design yourself according to your own taste. Fortunately, manufacturers keep this in mind and offer you various, often somewhat extravagant, design types.